In 1874 Moritz and Adolph Rosenheimer started a mercantile in Kewaskum. They were sons of Lehman Rosenheimer of Schleisingerville.

Lehman Rosenheimer was born in Bavaria in 1820 and immigrated to America as a young man.  He worked as a farm hand in the state of New York and worked his way to Milwaukee and then finally to Schleisingerville (Slinger).  In 1855, he began buying grain and cattle from farmers and selling them supplies and clothes that they needed. As his businesses in Slinger began to grow, Lehman sent his second eldest son, Moritz to Kewaskum  to establish a similar business. Adolph a younger brother, followed shortly and thus L. Rosenheimer General Merchants began operations on October 21st, 1874.

Moritz and Adolph were industrious men and their business expanded rapidly.  In 1903, the store expanded and Kewaskum was a developed market place.  The men expanded their business interests to include a creamery, a malt house, and a bank. 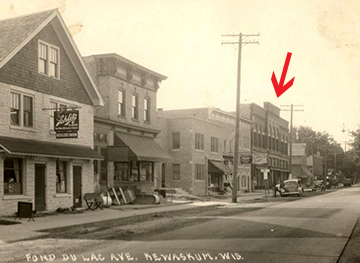 The store was sold to Richard and Jane Bechler in 1983 as family interest waned.  Rosenheimer’s Department Store was in operation for over seventy-five years.

After Bechler’s attempted to sell the building in the late 1980’s failed, the building was slated for destruction.  Demolition had actually begun, when Jeanne (Yeadeke) Griep rescued it in 1987.  Jeanne and Tom Griep purchased the building and started the General Store Antique Mall.

Jeanne Griep sold the General Store Antique Mall to Cindy Gruber who ran it until 2017 when the business was sold to Mary & Dan Weber.

Thank you for visiting the General Store Antique Mall located in Kewaskum.  If you have any questions or comments, please contact the proprietor, Mary, at 262-626-2885.

Tuesday-Sunday 10 am to 5 pm
Closed Monday